When Matt McCoart first came to Congressional Day Camp, he was just looking for another way to make a bit of money over the summer. What he found was a career-defining, life-changing experience.

In his own words: “I walked into my experience at Congressional expecting a fun summer job. What I got instead was an experience that will have an effect on me for a lifetime.”

A longtime counselor turned full-time administrator, Matt joined the Congo Camp family in the summer of 2011 as a lead group counselor. He had no idea what that summer would turn out to be. Like all first-time counselors, Matt jumped in head-first, embracing all the wild and wonderful things that come with leading a group of seven-year-olds. While he had a great time that summer, it was the Congo culture and community that brought him back the next year, and the year after that.

Over the next 7 years, Matt would be a lead counselor for a number of different groups, a counselor for campers in the bus program, and even a Congo Conquest captain!

Many counselors who pass through the gates on Sleepy Hollow take the skills they learned here and apply them to various fields. For Matt, however, Congressional became an integral part of his career path. “After my first summer at Congo Camp,” he said, “I knew what I was meant to do.”

In 2014, Matt graduated from Radford University with a degree in education. The next year, he joined the Congressional team as a year-round staff member. During the summer he oversees as the Head Counselor for Day Camp. For the rest of the year Matt is the auxiliary program coordinator, responsible for running the school’s
extended hours programming and other co-curricular activities. While Matt eventually plans to return to the classroom, he said: “For now, I love being at Congo Camp and wouldn’t want to be anywhere else.”

Matt’s time at Congo shows some of the best we have to offer. Not only are counselors given the opportunity and ability to grow personally, but professionally as well. This dynamic, as well as the natural energy of all who want to work at camp, creates a unique culture that keep them coming back year after year. Matt’s story is
one of many stories—stories of counselors former and present who speak about their time at Congressional with pride.
Amazing, impactful, fun, meaningful, rewarding, exhausting, life-changing—whatever the words our counselors use, they know that working at Congressional is more than just a summer job. 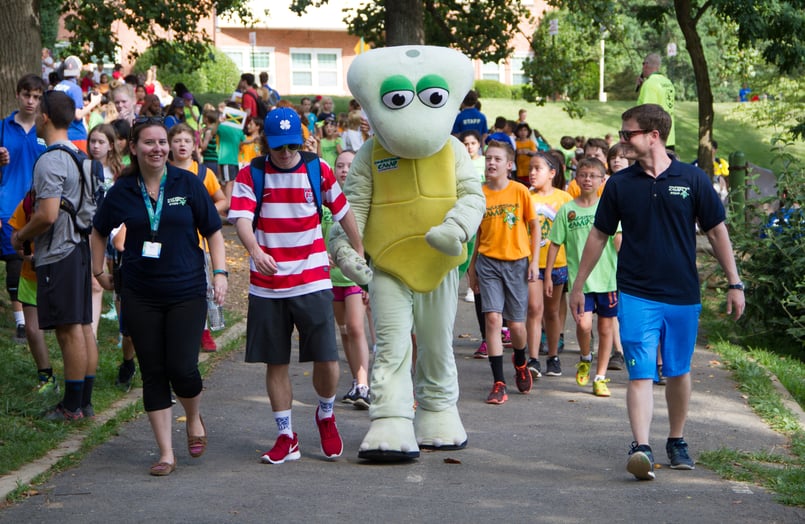 Matt recounted some of his favorite memories and lessons learned over his years at this special place. Check out his interview here:

What first drew you to Congressional Day Camp?

I was drawn to Congressional Camp in 2011 as any college kid is drawn to any job—in search of a summer job to fill my time and earn money. A friend had told me about the opportunity at the camp, and since I grew up as an older brother in a large family, frequently serving as babysitter to my younger siblings, I figured it would be
fun and I would be a good fit.


Why have you stayed?

I walked into my experience at Congressional expecting a fun summer job. What I got instead was an experience that will have an effect on me for a lifetime. During my time at Congressional, I have learned what it means to be a role model, leader, mentor, and professional while making incredible friendships and discovering my passion and career path.


How has your time at Congressional advanced or altered the course of your professional career?

When I arrived at Congressional, I had just finished my freshman year of college and hadn’t made up my mind with what I wanted to do with my life. I had a few different ideas, but no concrete answers. After my first summer at Congo Camp, I knew what I was meant to do. Working with my campers as a group counselor showed me how valuable and meaningful it is to know you can make a difference in someone’s life. It showed me how much that was worth and it led me to change my path.

While I was leaning toward a business degree, I switched to pursue a career in education. I graduated in 2014 with my teaching license and cannot wait for a career in the classroom. However, when the opportunity to join the Congressional team full-time appeared, it was an opportunity that I could not turn down. I look forward to rejoining the classroom, but for now, I love being at Congo Camp and wouldn’t want to be anywhere else.

Why should families choose Congo Camp for their children?

While Congo Camp’s sheer number of options are a huge feature and asset for the camp, the biggest reason why I would say families should send their children to Congressional is the culture. Summer after summer for 78 years, Congo Camp has built a culture and a team of counselors who are caring, passionate, dedicated, and energetic. These counselors are the foundation of camp and what makes Congo so great. Year after year, our counselors bring that passion, dedication, and caring nature that makes Congo so special.

This is what makes campers want to be counselors when they grow up. It’s not just a culture—it’s a legacy.

From your perspective as a head counselor on the administrative team, what is the most important role of a group counselor or specialist working with campers?

To me, the most important role of a group counselor is facilitating the relationship-building that takes place over the summer, creating the amazing Congo Camp spirit. Group counselors have to bring 16 individual campers, most of whom don’t know each other, and turn them into friends while providing that cheer, energy, and
enthusiasm that makes our Congressional culture so great.


Can you share a piece of advice for first-time counselors?

My advice to any first time counselor is this: Just jump in. Go for it. Be silly, goofy, fun, and be the leader you didn’t know you could be. There is no job quite like camp. It’s a fun, memorable, feel-good, and absolutely exhausting job, but have fun and your campers will too.

Green, all the way!